After weeks of social distancing, the Queensland Government is gradually easing restrictions around public gatherings. Cautiously, we look forward to seeing more local events listed on Lively50plus. If in doubt about whether a particular event is currently operating, please check with the contact person for that event.

If you do attend an event, please practice appropriate social distancing and follow the Australian Government health warnings.
www.health.gov.au 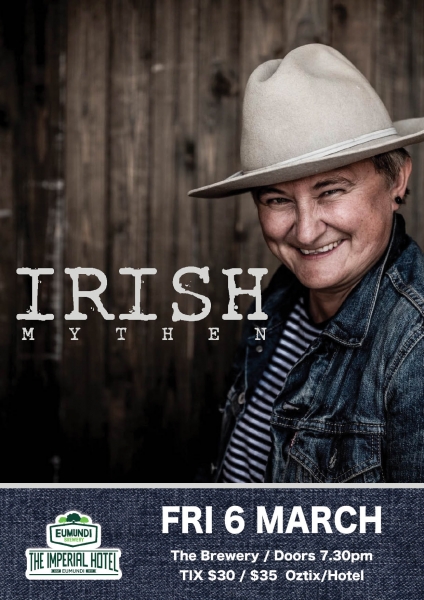 No stranger to our shores, Irish Mythen brings her huge voice, amazing stories and quick wit back to Australia, and will be taking to the stage in The Brewery at The Imperial Hotel Eumundi on Friday 6 March. She will be supported by Cass Eager.

IRISH MYTHEN
I had no idea what to expect when this five foot nothing lady took the stage, all smiles and twinkling eyes and guitar. Then, she opened her mouth and out flew a voice that came straight from the Heavens with all the power and the glory and the truth of someone destined to be a singer. I've been blessed with seeing and hearing a lot of talented musicians in my life, but I have never experienced anyone quite like Irish Mythen. She is a force of nature and a gift from Almighty Herself ~ Lisa Schwartz, Philadelphia Folk Festival

"This Island creates music and musicians, art and artists. I found a shift to take things more seriously when I moved here," says Irish. And she did just that.

Her latest release, 'Little Bones', gained her recognition around the globe with nominations and wins coming from Music PEI, East Coast Music Association, Folk Alliance International and SOCAN. Write-ups in Australian Guitar Magazine, Rolling Stone, and a plethora of online publications world-wide have helped plant Irish firmly on the map of 'must see artists'.

Internationally renowned but defiantly grassroots, Cass Eager is one of those rare artists that’s mastered everything from the foot-stomping blues to a sensual slow burner. She’s been called ‘one of the best female singers in Australia’ by Richard Glover (ABC), ’the girl with the golden voice’ (Daily Examiner), and Diesel claims ‘she has a voice so sweet she could sing the phone book and you wouldn’t get bored’.

Cass’ music has taken her to some of the world’s most far-flung places. Performing in diverse locations from CBGB’s in NYC to the beachfront huts of Dili has given Eager a depth and richness that comes from experience. She’s done several ‘tours of duty’ entertaining Australian troops, from Egypt to East Timor (with Paul Kelly and Peter Garrett), the Middle East to the Solomon Islands. She’s toured through North America and Canada – alone waith her acoustic guitar; alongside Ash Grunwald; and with US musician Bob Egan (Blue Rodeo; ex-Wilco).

Cass also performed for Prince Harry during his Australian visit, and after being invited back for a repeat performance, ended up giving the prince guitar lessons.