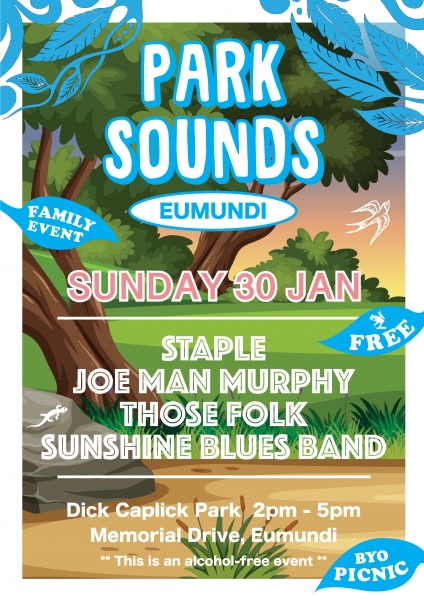 Bring your picnic rug on Sunday 30 January from 2pm - 5pm for PARK SOUNDS – a fabulous afternoon of FREE live music in Dick Caplick Park, right in the centre of town Eumundi.

The line-up will see Staple, Joe Man Murphy, Those Folk and Sunshine Blues Band  take to the stage!

STAPLE
Staple is an Indi Pop band form the Sunshine Coast. Band members Brooke, Tatum, Harriette, Kayla and Milly are school mates and best friends. Staple began in 2021 and won St Andrew’s Battle of the Band in October this year due to there blend of sweet harmonies and infectious energy.

JOE MAN MURPHY
Joe Man is not your average performer, he puts his heart and soul into every show, whether it be a Festival sit down show or a busking performance. For Joe Man, music is an addiction, a way of life, a way to share his Irish roots and Australian experience. He is beloved to many people in the Folk Festival music community around Australia and is a world class Act. Once you’ve seen Joe Man Murphy you go away feeling connected, and part of something greater than yourself.
There is an old Irish saying that a true entertainer can make you laugh and bring you to tears in the same song. Joe Man Murphy continues this tradition and is a master at it in his own right.

THOSE FOLK
Truly authentic, naturally charismatic, and delightfully entertaining, Lawrence Menard (USA) and Clare Quinn (AUS) are the transpacific troubadours known as ‘Those Folk’. With Lawrence’s Cajun beginnings and Californian upbringing melding with Clare’s grounding in Australian folk music, their musical inspiration is diverse and ever expanding. Their worlds collided on the streets of Edinburgh, Scotland and the pair have been an inseparable duo ever since. Imagine Americana legends Gillian Welch & Dave Rawlings, with a dynamic twist. Their intimate stage show is constantly evolving with the introduction of new instruments and dynamic songwriting. Vocal harmonies are featured alongside guitar, mandolin, banjo, accordion, harmonica, and percussion.

SUNSHINE BLUES BAND
The Sunshine Blues Band sprang out of a desire to play some blues that are a little bit different. They offer stripped down, upbeat, rhythm inspired music, rooted in Chicago and branching out to Texas, LA and beyond. They are a four-piece blues band featuring Russ Babcock on vocals and harmonica, Stix Malone on drums, Ian Smith on bass and Chris Roberts on guitar. Join us for toe-tapping, hip-swaying blues!

PARK SOUNDS is an initiative of the team at the Imperial Hotel Eumundi.

Book:
No booking required, just add your name to the Who's Going list to let others know you will be attending.
Web:
http://www.imperialhoteleumundi.com.au/whats-on-listing/park-sounds-eumundi
Views:
48 people have viewed this event
Comment about this event:
Who's Going:
Katie H
Keywords:
Park Sounds - Free Live Music Event, Dick Caplick Park, Eumundi, What To Do In Eumundi