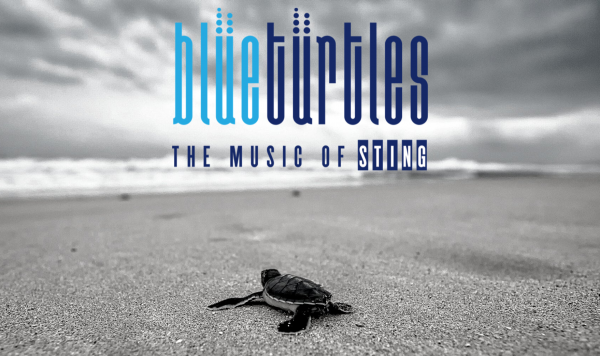 BLUE TURTLES – The Music of STING formed in 2019 and is currently the only Australian band celebrating the music of one of the 20th century’s most popular singer songwriters and critically acclaimed musicians. Given his exceptional song writing talent, musical skill and continuing popularity, it’s no wonder that shows are sold out so quickly and within days of promotion. BLUE TURTLES has already gained a reputation as “world-classed”.

As a stellar solo artist, composer and musician and the former front man of iconic British band The Police, STING has achieved album sales of over 100 million album copies and won 17 Grammy Awards along the way. He continues to write, collaborate and perform as is still performing to packed concert halls, auditoriums and music festivals throughout the world. STING is also an inductee to both the Songwriter’s and Rock and Roll Halls of Fame and has written the most-performed song in the history of radio airplay. Which song?!

BLUE TURTLES – The Music of STING currently performs many of his world-wide smash hit songs including If You Love Somebody, Every Little Thing She Does is Magic, Fragile, Every Breath You Take, Fields of Gold, We’ll Be Together, It’s Probably Me, Roxanne, Love is the Seventh Wave, Walking on the Moon, Seven Days, Fortress Around Your Heart, Englishman in New York, We Worked the Black Seam, Children’s Crusade and many songs from his multi award-winning albums including Dream of the Blue Turtles, Bring on the Night (live album), Nothing Like the Sun, Ten Summoner’s Tales and Brand New Day.

Members of the BLUE TURTLES are some of Australia’s finest and most-respected musicians with an extensive list of performing, touring and recording credits with Grammy, ARIA award winning musicians and songwriters, a Rock and Roll Hall of Fame inductee and both national and international touring artists

WHAT AUDIENCE MEMBERS ARE SAYING …

“… We absolutely loved your show. Thank you for the fab music and the walk down memory lane with Sting.”
“… World-classed musicians playing a selection of STING songs – HEAVEN!”
“… Just a terrific show. How lucky to see such great musicians in such a superb intimate location.”
“ … So I’m going to remove the label of a tribute band from you guys. Your show was fantastic.”
“… Awesome, as usual … I’ve run out of superlatives!”
From a recent online review of a sold-out BLUE TURTLES – The Music of STING show ……

“… These are not easy songs to perform … play or sing. And this band brought them all home perfectly … Clean and creamy smooth, when called for. Powerful lead vocals, with sweet two and three-part harmonies, when needed. Six talented musicians. Rich, Sting-quality arrangements and instrumentation. Vocals that hit every piercing high and touched every rumbling, growling low. All with an unmistakeable Sting feel, touch, tone and inflection. Thank you … for a great Saturday night by the Brisbane River.”
When:
Saturday at 7.30pm 21-May-2022
Where:
The J Noosa
60 Noosa Drive, Noosa Junction
Noosa Heads
Contact:
Contact details hidden as this is a past event.
Book:
Contact the venue and make your own booking.
Web:
https://www.thej.com.au/blue-turtles-the-music-of-sting/
Views:
104 people have viewed this event
Comment about this event:
Who's Going:
Melanie E
Keywords:
Blue Turtles - The Music Of Sting, The J Noosa, Noosa Heads, What To Do In Noosa Heads