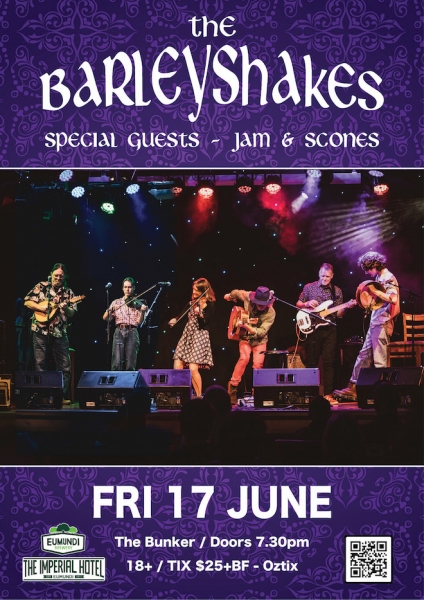 Join us in The Bunker on Friday 17 June for a night of Irish tunes with The Barleyshakes, featuring brand new material and lots of your old favourite Irish songs. The Barleyshakes will be supported by emerging act, Jam & Scones.

The last three times the Shakes (as they are often known) played the Imperial, it was a total sell out, so early booking is advised.

The Barleyshakes are famous throughout the land for their modern yet traditional take on lively Irish music - intense energy, beautiful harmonies, and irresistible dance rhythms.

Brewed in Ireland and distilled in Australia, The Barleyshakes have been performing since their inception in Dublin in 1995. They have a remarkable ability to hold hands with the tradition of Irish music while infusing it with a fresh and contemporary spirit.

Their live shows have taken them around the globe and they continue to take audiences on a joy-filled ride wherever they perform (they were a highlight at the last fire event for Woodford Folk Festival, where they performed to 20,000 revellers).

They have shared the stage with Christy Moore, Damien Dempsey, Lunasa, Metallica, Kila, Joe Cocker, Sharon Shannon, Altan, and Grada - to name a few. After well over a decade together, this ensemble know each other so very well, creating something fresh every time they perform.

Frontman Alan Kelly has won many awards for his songwriting, including a Queensland Music Award for world music. Two members of the band also contributed to the Lord of the Rings award-winning soundtrack.

Jam & Scones are a recently formed Sunshine Coast/Brisbane based band who are breathing life back into classic rock, with their diverse and dynamic arrangements of timeless hits. Having just begun university, this seven-piece ensemble of groovy young adults complement rock, soul and reggae classics with originals from their new unreleased EP. With their soaring saxophones, rich harmonies and energetic stage presence, these gents are quickly bursting onto the live music scene.

Imperial Hotel Courtesy Bus The Imperial Hotel’s FREE courtesy bus operates Friday and Saturday nights from 5pm, travelling to Eumundi, Belli Park, Cooroy, Doonan, Eerwah Vale, North Arm, and Verrierdale. Phone Aaron on 0478 814 169 to book.
When:
Friday at 7.30pm 17-Jun-2022
Where:
The Imperial Hotel Eumundi
1 Etheridge St
Eumundi
Contact:
Contact details hidden as this is a past event.
Book:
Contact the venue and make your own booking.
Web:
https://www.imperialhoteleumundi.com.au/whats-on-listing/the-barleyshakes
Views:
92 people have viewed this event
Comment about this event:
Who's Going:
Katie H
Keywords:
The Barleyshakes + Jam & Scones, The Imperial Hotel Eumundi, Eumundi, What To Do In Eumundi